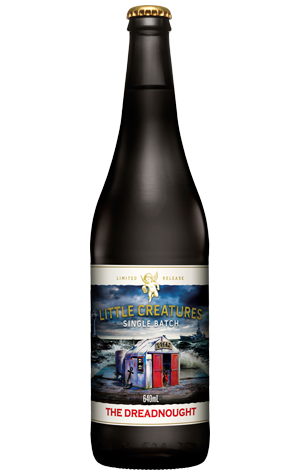 One of the most popular beers in Little Creatures' limited release cannon is back for another winter run out. And this time around it's got its original name back too. The first Single Batch Dreadnought was released in 2011, with Return of the Dread paying homage in 2015.

The plan now is for The Dreadnought to be an annual winter release. Tagged a Foreign Export Stout and weighing in at 7.2 percent ABV, it's a beer with both feet planted firmly in the past. In doing so, it's a reminder why some beer styles have a timeless appeal.

Here, it's predominantly the half dozen specialty malts that do the impressing, combining to create a jet black beer with a dark brown head from which dark chocolate and roasted aromas rise to welcome you in for more of the same: layers of rich, dark malts swirl around, backed up by a drying, earthy bitterness.