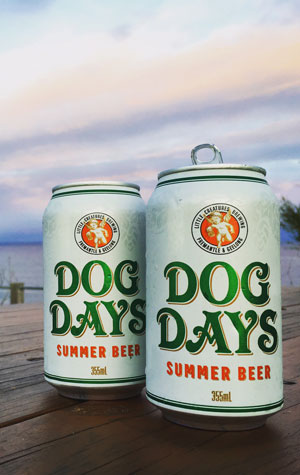 Ever since the brewery started releasing Single Batches and seasonals in bottles, stretching back to when the Geelong operation was a mere pipe dream, Little Creatures has never looked back. No beer has ever enjoyed a second run, the nearest being Return of the Dread acting as cousin to 2011's popular Dreadnought. But now a seasonal has broken rank, with last year's summer release, Dog Days, returning to the fold in can form for 2016/17.

Last time around, we said of Dog Days that it came with "peachy, tropical hop aromas and flavours as well as a resinous character to its surprisingly bitey bitterness" and also wrote of "grassy, almost wet hop, aromas there too in a beer that is essentially a refreshing mouthful of hops". As for this time around? Well, it seems even hoppier still, to the point that we questioned whether the brewers had put a hop sock full of flowers in each and every can. So, if you're after plenty of fruity hops without much in the way of booze this summer...