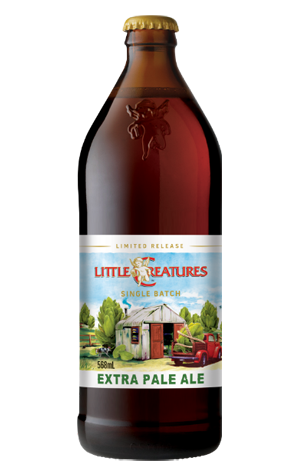 One of the most enduring discussions in and around the Australian craft beer world in recent years has been of the "Little Creatures Pale isn't what it used to be." / "Yes, it is. If anything, it's better." / "Peoples' tastes have changed, not the beer." variety. Short of boarding Doc Brown's DeLorean with a bunch of expert tasters and heading back in time, there's little hope of it ending. However, for those bemoaning a perceived drop in hoppiness in the beer, the Creatures brewers have a solution of sorts, albeit a temporary one, in the shape of their latest Single Batch.

It's the Extra Pale Ale (which they're shortening to EPA rather than XPA), in which they've "taken the components of an American Pale Ale and cranked it up!" That translates as more booze than their Pale Ale (up to 6.5 percent ABV), more bitterness (up to 55 IBU) and more punch. It's a deep golden pour in which a combination of Cascade, Willamette and Chinook hops offer up pine, citrus, pineapple and lime characters and a lean, slightly resinous, grapefruit like bitterness in tandem with balancing sweet malts.