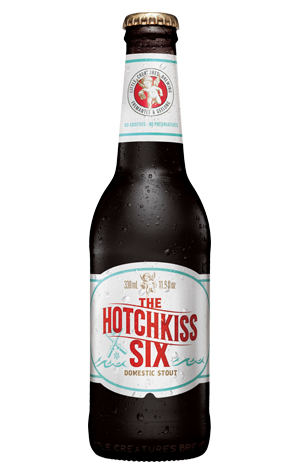 A year ago, Little Creatures set off ripples of delight among the country's beer lovers when they released Return of the Dread. Their first winter seasonal was a homage to one of its most popular Single Batch releases, The Dreadnought, and was a fine, bold, complex stout in its own right. For winter 2016, they've done it again: releasing a stout with links to the Dreadnought. Yet it's not Return of the Dread II...

History lesson aside, what of the beer? The fact that it isn't a higher ABV beast may leave Little Creatures open to moans from the vociferous pointier end of the online beer chatterati, as has happened with past limited releases in which they haven't gone big on hops or booze. But,as with such past releases as the Marzen, to moan about size would be to overlook the qualities of the beer. Sure, The Hotchkiss Six isn't going to coat your palate and give you a warm fuzzy glow at the end of a single stubby like the Dreads. What it will do is go down a treat with lovers of dark ales, with layers of dark chocolate and gentle roast mixed with a hint of fruity hops, while oats round out the palate, softening the beer and making it seem bigger than it is.