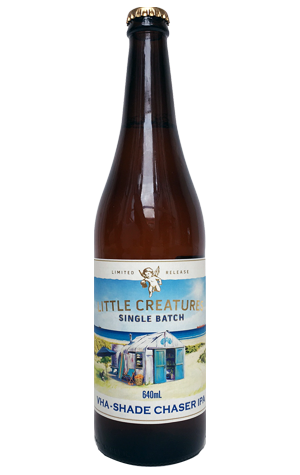 Last Spring saw Little Creatures reboot its Single Batch series with a limited release beer that was a nod to one of the most popular releases from Creatures' first round of Single Batches, The Big Dipper. It went under the banner "VHA" (Very Hoppy Ale) and, for their end of summer follow up, they've stayed in IPA territory but reined things in.

VHA II is the Shade Chaser, an IPA the brewers say took its inspiration from the stripped back, hop forward West Coast USA styles. It's a single malt and single hop affair too, combining Maris Otter from the UK with fresh harvest Citra hops from the US. It's a combination that delivers an IPA that's more delicate than aggressive, with citrus, melon and lime characters joined by the sort of grainy cereal notes familiar to anyone who's sampled traditional English golden ales.

If you're after an IPA to knock you back a step or two, this isn't it; if you're after something hoppy to take the edge of a hot day, this should fit the bill.