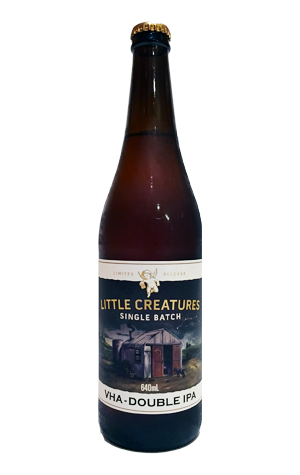 When Little Creatures announced it was bringing down the curtain on its Single Batch releases, there was some sadness among the nation's beer lovers. Many would have heard the news and wistfully remembered their favourites (Dreadnought and Mr Obadiah at Crafty Towers) and, in all likelihood, blamed the new overlords at Lion for the decision. However, things since then haven't turned out too badly...

Two bottled seasonals a year have appeared, such as the hoppy-as-you-like summer beer Dog Days, Dreadnought tribute act Return of the Dread and baby cousin The Hotchkiss Six, while smaller keg runs of other limited run beers have appeared too. Meanwhile, the reworked Pilsner is reigning CBA Champion Beer of Australia. And now the Single Batches are back. Oh, what teases!

The series returns with a similar look label wise but in bigger bottles. And it returns with another tribute act: this Double IPA pays homage to another old favourite, the Big Dipper, and is also the first of what they promise will be a series of Very Hoppy Ales (or VHAs).

Trying to cast one's palate memory back five years is a pretty fruitless task (or fruity task in this case), but here's what we said about the Big Dipper at the time. Here, rather than resin and grapefruit, we reckon the mountains of hops lean aroma-wise towards stone fruit, peach and pineapple, with flavours of pine, spruce and some spiciness following.

With lupulin threshold shift [the need over time for more hop bitterness to perceive the same impact] generally accepted as "a thing", it's also tricky to assess how two DIPAs five years apart present in terms of bitterness. But here it certainly seems there's sufficient balancing malt sweetness and alcohol in place to keep any aggression hidden well away; indeed, the only hopheads likely to be disappointed are those who like their IPAs to bring a sledgehammer to the party. It's more about hop aroma and flavour than bitterness – a 7.7 percent ABV pale ale, if you will.

Then nationwide (limited run of kegs only)