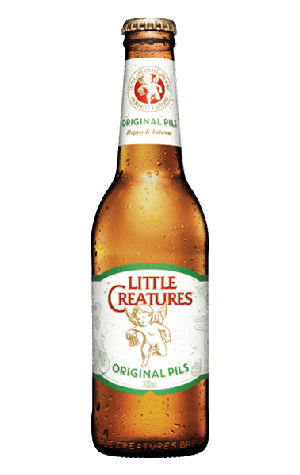 Little Creatures Pilsner had always felt to us a little like the forgotten member of the brewery's family. The Pale is, well, the Pale, Rogers' has long been something of a cult classic among mid-strengths, Bright Ale has done plenty of heavy lifting in venues across the country over the years and got a refurb last year, while by virtue of being the newest member of the lineup, the IPA has been guaranteed coverage in the past couple of years too. The Single Batches and new Seasonals have found favour too, while the Pilsner, well, it's always been there.

And now there's a new Pilsner (albeit one titled the "Original Pilsner" when, surely, it's replacing their original pilsner). The brewers revisited the recipe, decided to model the beer on those out of Northern Germany, where they like their pilsners hoppy, and promptly won the Champion Light Lager title at the 2015 Craft Beer Awards and then the top beer trophy the following year (before all Lion brands were then excluded from 2017 onwards as the Craft Beer Industry Association became the Independent Brewers Association.

The judges presumably fell for its crystalline charms, which emit soft floral and spicy hop aromas alongside distinctive pilsner malt characteristics, before delivering a tight and biting, cleansing bitterness.