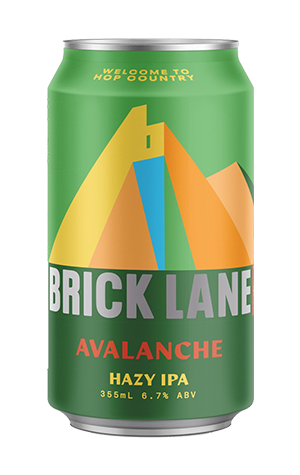 Brick Lane really are stepping up the frequency of their limited release beers as we move through the second half of 2020; a fortnight ago it was the dark hoppy ale with one foot in winter and the other in spring and now it's followed by a beer with both feet in next season: the hazy Avalanche IPA.

It’s a name that adds a little more weight to our theory that the team at Dandenong has an eclectic taste in music, while stylistically it's not their first foray into such territory either, with the brewery having teamed up with Carwyn Cellars to brew the All Together Beer to support out of work hospitality workers – which you can read about here. What's more, the Melbourne brewery isn’t slowing down either: Avalanche is the first hazy of four such beers planned.

But onto the hazy at hand... The pale yellow Avalanche is hopped with Mosaic, Citra and Centennial, which snowball into a tropical mix of mango and guava, plus nectarine and orange peel. There’s a hint of pine in there too, sitting within a creamy mouthfeel and heralding a slight bitterness in what’s the kind of dialled in, well-executed hazy anyone following Brick Lane's story would expect.

For more, or to order online, head here.

Crafty Cabal members get a discount on all case orders too