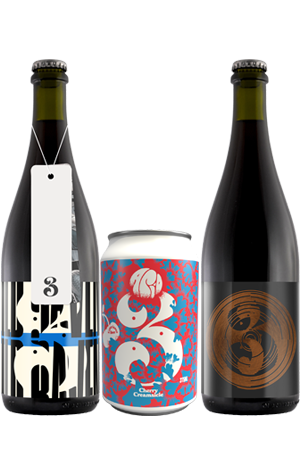 This year's Indies brought yet more trophy success for 3 Ravens, as the reinvented Thornbury brewery took out Champion Pale Ale for their flies-under-the-radar New World IPA. Yet, when I called in the following week, there was as much excitement about the gold for their 2019 Methode Ravens. If you've met the brewing team, you'd understand why they'd take pleasure in such a beer's success, given their fondness for barrels, blending, bugs and the beauty of time passing. That Methode Ravens 2020 was set for imminent release was the mere cherry on the top.

The annual release is a celebration of their evolving house culture, this time featuring a blend of three batches, including one brewed at Newstead in 2018: the Brisbane brewery's Zoo 7.0, a German-style Hefeweizen matured in their barrels with Brett bruxellensis for six months, followed by a further 15 months maturation in the 3 Ravens cellar. The result is a finely compiled, balanced display of what you want in such a beer without being overly demonstrative in any direction. Some of the brewery's Wild Ravens and Nat Rav beers reveal their disparate parts; this instead delivers its many elements – Bretty funk, oak, aged malt sweetness, an apple cider like acidity, dryness – as a delicately complex, eminently drinkable whole.

From cherry on top to Cherry Creamsicle, as the summer of sour series reaches its fourth and final edition. Except it might not be the end, as the prior three have proven popular enough there could be a fifth. As for no.4, it represents a return to something approaching the OG Acid upon which the Creamsicle series is built. Sure, there’s a creamy, boiled lolly side to the sour cherries, particularly in the aroma, yet there’s less obstacles for the underpinning tartness to overcome for it to deliver the refreshment you’d expect from such a beer.

And from refreshment to long evenings contemplating life, the universe, and everything. Solera Stock Ale is the culmination (or continuation) of a project dating back to a beer called Bittersweet End in 2011. You can delve deep into the backstory in our chat with head brewer Brendan O'Sullivan here – originally for Crafty Cabal members, but now available for the public – or grab a bottle and wallow in its uncarbonated, sherry-esque, 16 percent ABV indulgences. It's not cheap, but we know of a Cabal member who went back and bought six more...