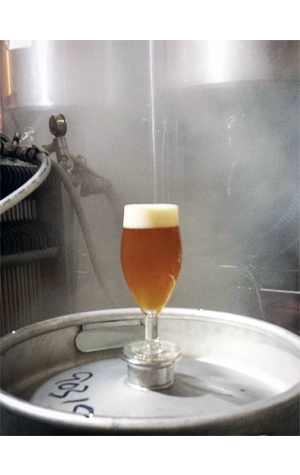 It says something about Mash head brewer Charlie Hodgson's standards that his thoughts on Sarcasm Mk I, a double IPA that was released a few weeks ago, mostly in WA, were pretty critical; "didn't really get what I wanted"; "a touch sweet, a little bit boozy and a little confused." It was one of the beers on tap at the Royston for Pint of Origin WA during Good Beer Week, meaning we got to have a taste. Not only was it far from the sweetest of big IPAs we've sampled, according to bar manager Rachael it was probably the most talked about beer out of all of those tapped during the festival – and not in a negative manner.

Anyway, it's such standards that bring you Champion Australian Beer trophies (as he won for Copy Cat IPA in 2014), which means that for Sarcasm II he's made a few changes. No oak chips this time, better extraction and attenuation during brewing and fermentation, with the result a move from 8.5 to 9.5 percent ABV and, he says, a beer that is "much cleaner and better balanced."

As for the name, it's a wee jab at the craze for "session" beers. Namely, despite their size and character, the Mash team reckon their Copy Cat and this beer both have serious drinkability too. Thus, it's tagged a “Session Double IPA" – "big and strong yet very approachable; a gentle giant!"