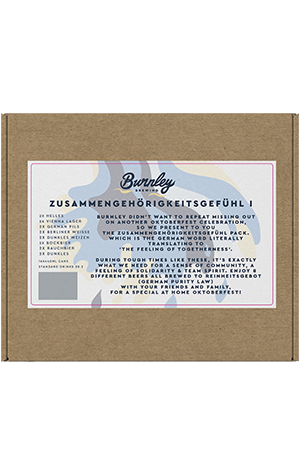 Oktoberfest is always a busy time for Burnley Brewing, with the Richmond brewpub transforming into a slice of Bavaria in honour of the land where head brewer Michael Stanzel and head of sales Chloe Hoiberg first dipped their toes into the professional beer world. It's month-long celebration that’s heavy on the pork knuckle, schnitzel and Reinheitsgebot, or Germany Purity Law, with the brewery’s 14 taps given over to beers from across Germany. The constant twist and turns of 2021 mean the brewery can’t welcome people inside like they normally would but it hasn't stopped them bringing people together with beer in 2021. Instead, they've painstakingly planned two mixed cases filled with German beers and given it the name Zusammengehörigkeitsgefühl, which means "the feeling of togetherness".

Each box includes 16 beers made up of a mix of new ones, while box number one also contains some we've covered before, including the brewery’s Helles, Vienna Lager, Dunkels and their German pilsner, brewed with Hofbrauhaus Melbourne and which you'll typically find pouring at the latter.

As for what else is inside, you likely won’t find a bigger collection of straight-down-the-line and traditional beers in one place this year. Each new release in the pack takes design inspiration from different parts of Germany and, while the Burnley team can't explain a style's history over the bar, the brewery hasn't given up on education: the labels let you know which part of Germany the style originates from, like with Rauchbier, the smoked beer of Bamberg which pours copper in colour and provides a moreish smoked Beechwood character. It means the 5.4 percent ABV beer darts between light flavours of smoked bacon and ham and while there’s a richness to the malts that's balanced by the dry finish.

That’s joined by the 3.0 percent ABV Berliner Weisse, a style we see in many variations but rarely without a heavy dose of fruit. Despite the lack of fruit, it still provides a few fruity notes, with lemon sherbet and a flavour akin to underripe nectarine in the mix alongside the beer's mouth-puckering tartness.

Then there’s Dunkles Weisse, the dark wheat beer rich with biscuity and roasted notes, which are joined by banana and cloves esters. With a decent carbonation and textural mouthfeel, it's one that, if you've got the time and skill at hand, would likely be a fitting companion to even the heartiest pork knuckle and plate-full of kraut. That leaves us with the biggest of the bunch, Bockbier, which pours a clear and glistening golden straw that makes it look a lot of much lighter lagers. Where it differs is in its warming level of booze and an ABV of 7.1 percent, while there's quite a rich mix of caramel, Port and dried fruits.

If that doesn’t sound like enough German beer to get your through Oktoberfest, Zusammengehörigkeitsgefühl Part Two is due out at the start of October.

NB If you're a member of our beer club, The Crafty Cabal, and are reading this before October 14, you can enter a competition to win one of three packs.

Still available from the Burnley taproom at time of writing.