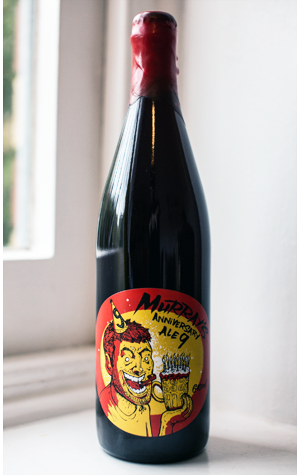 Murray's Anniversary Ale always used to make us think of Sir Alex Ferguson. Not because it's big and ballsy and tends to improve with age. No, for the rather more tangential (and possibly somewhat OCD) reason that it was released each year on his birthday at New Year. This time around, the beer is coming out earlier in time for Christmas but, if we're going to keep flogging that tangent like the racehorses that once got Lord Fergie into a wee spot of bother once, then there's still a link insofar as this time the beer has been conditioned with red wine staves from Hunter Valley wine barrels, the kind of thing the former Man Utd manager might have offered up to visiting managers post-match.

Anyway, this is really going nowhere of any great relevance to the beer world so we'll move swiftly on. On to the fact that the ninth version of the beer is a collaboration, not in the beer sense but in the sense that it's the first to feature artwork from regular Murray's collaborator, Sydney-based illustrator and street artist Mike Watt. He describes his style as “kind of gritty and ugly”, something he's brought to the labels of AA9.

“These staves will not only add flavour and aroma from the inside surfaces that have been in contact with the red wine, but will also add raw oakiness from the outside surfaces of the staves,” said recently returned head brewer, Graeme Mahy. The brewers reckon there's a "distinct apricot finish", well, that or peach. At its heart it's an English-style barley wine and features "warming rich fruit cake-like sweetness from the caramel and roasted malts, with strong aromas of stone fruit and an assertive but balanced bitterness in the finish."

It can be cellared for up to 10 years and is available from the brewery from December 6 in wax sealed bottles.