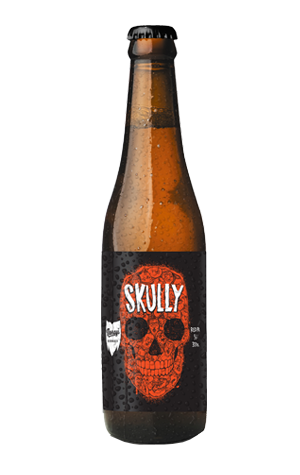 To coincide with American Independence Day 2015, Murray’s jumped on board the celebrations and released four US influenced IPAs: Icon, Black Bear, Fred and Skully. The latter was a red IPA that was well received to the point they had to do another batch. And after that batch disappeared, they were again hassled with: “When are you going to bottle it?” The problem was that even if they wanted to they couldn’t as the requisite hops weren’t available. Now they are and Skully is back again, and in bottled form.

The beer is built on Mosaic hops and the lesser-known Mt Hood variety, giving the beer those pronounced West Coast characters of citrus and pine, along with a herbal element. As much as the hops will inevitably be the hero in such a beer, the sweetness of the European caramalts stand up equally to ensure the flavours are balanced. As they currently only have enough hops for a few batches there’s little chance of it being a permanent release in the foreseeable future, so grab it when you see it.