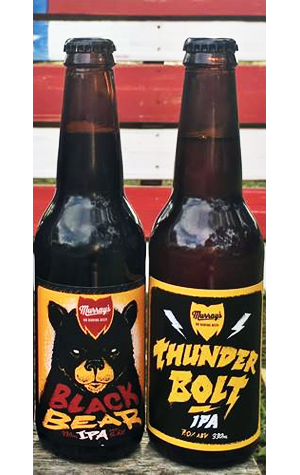 Having spent time on the road recently, there's been something of a backlog of new beers at Crafty Towers that require sampling and writing up for the site. Thus, while it might sound like sacrilege to some, there has to be a spot of realism involved, a balancing of not wishing to pour away beer with keeping one's liver and family onside, if you will. Yet sometimes there are moments when you have to risk health and home life, like when you come across Murray's Thunderbolt for the first time; it really would have been sacrilege not to drain every last drop of the brewery's hoppiest ever IPA, which is saying something for a brewery that has Icon and Spartacus in its lineup.

The beer, which took out the Champion IPA trophy at last week's Craft Beer Awards, has been loaded up with US hops Columbus, Equinox and Mosaic to create something that's tropical, piney, pineappley, ripe citrusy, spicy, well, lots of thingsy. And does so well. There's a danger with such beers that they become a sprawling mess but here, while there's heaps going on on the hop front – it's like a fruit salad that's been juiced and blended with a solid IPA – there's a big enough, amber-tinged malt base to ensure it catches the salad without spilling anything to the side.

As for the Black Bear, one of four IPAs released in bottle by Murray's in July (with yet more released as draught only), it's pretty much a straight down the line black IPA. Pouring a deep, thick, dark brown – but with the dark malts selected to provide mainly colour and only a tinge of background roast – the focus is on the piney, resinous American hops, with a little of the herbal character often found with such beers. It's nice and clean with a bitterness that builds without being overbearing.

Other good beer stockists across Australia